Who is the Greatest Forgotten Scientist?

Beeyon > News > Who is the Greatest Forgotten Scientist? 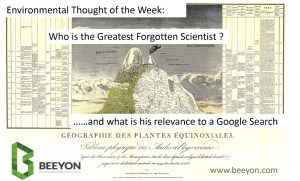 Alexander von Humboldt (1769-1859) considered by many of his contemporaries and subsequent scientists and philosophers such as Darwin, Goethe and Thoreau as the scientist who made the most original contributions to the fields of Botany, Biology, Geology and Meteorology in the context of their inter-relationship and influences. He saw the “connectivity” and the holistic aspect of nature. More species and places are named after him than any other person. From expeditions in S. America (1799-1804) and Russia (1829) he remarked on climatic effects through deforestation and most prescient of all the “Great masses of steam and gases” from industry. He produced the first Infograph, the “Naturgemalde” (shown) to explain climate zones.

His idea of anthropogenic climate change is evident even in a simple Google search. With over 7 Billion searches/day, each consuming on average 0.0003kWh (a 60W bulb for 17s), this aggregates to the power for 1.4 Million homes and a Carbon footprint of 5 Million Tonnes CO2e/year, with fossil fuels.

Do you know the carbon footprint of your business transactions and services?